Thousands of people take part in a protest accusing the authorities of a coverup after an unresolved death in March of a student in the Bosnian town of Banja Luka, 240 kms northwest of Sarajevo, Friday, Oct. 5, 2018. Months-long protests over the death of 21-year-old David Dragicevic have posed a challenge to the government of Bosnian Serb leader Milorad Dodik ahead of Sunday's election.

BANJA LUKA, Bosnia — The protests he leads have drawn thousands of people for months and have become a symbol of resistance ahead of Bosnia’s tense election on Sunday. But Davor Dragicevic says all he wants is justice for his son. 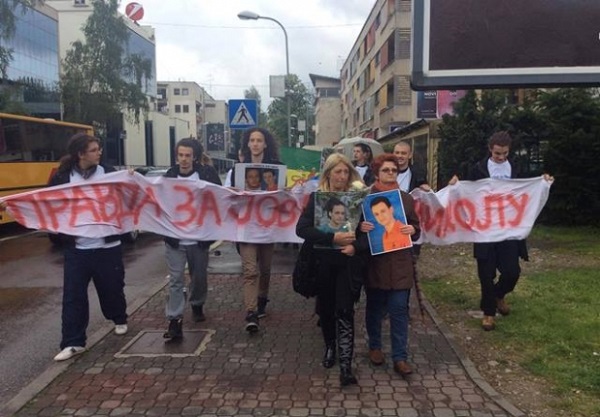 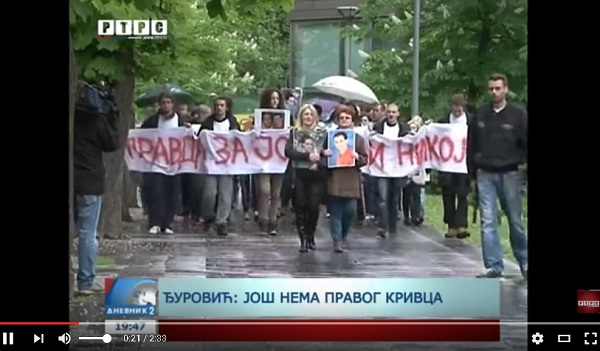 Father of Davor Dragicevic speaks of quest for truth
AP Archive
Objavljeno je bilo 11. okt. 2018
(6 Oct 2018) A Bosnian protest leader who has drawn thousands of demonstrators and become a symbol of resistance has told the Associated Press that all he wants is justice for his dead son, as the country prepares for a tense election on Sunday.
When the body of 21-year-old David Dragicevic was found in March, police said it was an accident.
But the family didn't believe them, launching a quest for truth that has grown into a wider civil movement against injustice and top-level corruption in the Balkan nation.
Months of rallies in Banja Luka have posed a challenge to President Milorad Dodik, a hardline Serb who is running for a seat in the three-member Bosnian presidency in the country's general election on Sunday.
On Saturday, Dragicevic was still at the square, camping in a small tent he has set up by a heart-shaped shrine for his son where citizens constantly stop and light candles or put down flowers.
His "Justice for David" group also has drawn huge support on social networks.
Authorities have denied the allegations that they were covering up David Dragicevic's murder and protecting his killers from prosecution, while pro-government media and officials have described the protests as part of a plot to weaken the government.
Dragicevic insisted in an interview with the Associated Press on Saturday that his son was beaten, tortured and brutally murdered before his body was discovered in Banja Luka.
He said the apparent bid to hide the truth showed the authorities were involved and know who's behind.
Police have also initially suggested that David Dragicevic was involved in a burglary prior to his death and used drugs, the claim his father vehemently denies.
Two people have been detained in the meantime but the investigation has not been concluded.
At Sunday's election, some 3.3 million voters will choose a vast array of institutions in the complex governing network created by the peace deal.
Dragicevic said he never meant for his movement to be political and plans to create a fund for children and other people in need once his son's killers are behind bars.
He didn't specify why David was killed.
"I know the truth, I am only interested in justice for my child," Dragicevic said.
"I will never again see him and kiss him. Never. There is nothing (else) to live for, nothing."

David Dragicevic, a young Serb-Bosnian hacker, disappeared in the night from March 17 to March 18 this year, and his body was found in the vicinity of Banja Luka on March 24; it was clear from his heavily disfigured body that he was killed by protracted brutal torture.

From March 26, daily protests have taken place in the main square of Banja Luka, organized by his father Davor under the title "Justice for David." Police first declared David's death a suicide, and only after strong public pressure began to investigate it as a case of murder, but with no results yet.

Eventually, it became clear that David had discovered traces of corruption and other criminal activities of the ruling clique. So he had to disappear.

A week ago, the continuous protests erupted into a large mass gathering, with tens of thousands participating, and dozens of buses bringing people from all of Republika Srpska into Banja Luka. The ruling clique reacted with panic: thousands of policemen controlled the streets and blocked entry to the city.

Now comes the true miracle. Unexpectedly, in a wonderful display of trans-ethnic solidarity, similar gatherings took place in other Bosnian cities where Muslims are a majority. In Sarajevo, the capital of Bosnia, hundreds demanded justice for a similar case that happened in their midst: the death of Dzenan Memic, who disappeared in the night of February 8 to February 9, 2016, which was never seriously investigated, although his body was also disfigured by traces of torture.